The best Excimer Laser in the country

Currently we have the Excimer Laser Technolas TeneoTM 317, this compact equipment provides more predictable, accurate and reliable results to the patient. This modern excimer allows to have better results in less time. This laser has some special features such as eye tracker or eye tracker, which allows to have a safer surgery. It also has substantial improvements in the system of distribution and evacuation of ablations, lighting and an ergonomic and flexible design that guarantees greater well-being for both the patient and the surgeon. Without a doubt, the recovery process for the patient is much faster compared to other equipment.

Unlike others, the Excimer Laser Technolas TeneoTM 317 also has unique properties to treat patients with presbyopia. This equipment has a diagnostic workstation and a simplified tactile information entry system which allows for customized calibrations and much more accurate results. The principle of this equipment is based on a lower complexity and an easier use, which results in a lower probability of errors. This team is unique in Ecuador and one of the few in Latin America, within the history of the clinic is the third generation of excimer laser, which shows the constant technological innovation that characterizes ClĂ­nica Sancho.

ClĂ­nica Sancho has the best option in terms of visual correction, which can reduce or eliminate the dependence on frame lenses or contact lenses, completely changing their way of life, this is possible through the most sophisticated laser technology, which with great precision shapes the anterior surface of the eye called the cornea.

How does the Laser Excimer works?

It is applied with the technique known as refractive photokeratectomy. The Excimer is a beam of fluorinated argon laser that projects onto the surface of the cornea to change its original shape and adapt the corneal surface so that the patient improves their visual acuity without optical correction. There are two types of techniques used in excimer laser surgery PRK / LASEK and LASIK.

The first technique called PRK or LASEK removes or eliminates the corneal epithelium, which is the most superficial layer of the cornea and then supplies the excimer laser by shaping the cornea according to the required correction, finally a type of special contact lens is placed that allows regenerate the removed epithelium. Total visual recovery with this technique takes a few days depending on each patient.

The second technique that is also frequently used in this type of surgery is called LASIK, in this technique a keratome is used to make a transversal cut in the thickness of the cornea, lifting a thin corneal blade (flap). The excimer laser is then supplied by shaping the cornea according to the required correction, finally the corneal blade (flap) previously raised is restored in its original place. With this technique, vision is recovered almost immediately, however it is not recommended when the patient performs contact activities since the raised “flap” takes a long time to completely heal. 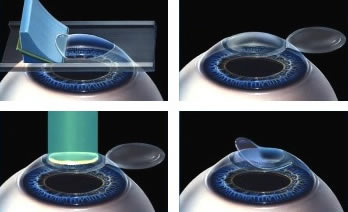 How is Refractive Surgery?

This procedure takes only a few minutes, anesthesia is used based on drops and the patient does not require hospitalization, in certain cases a certain pressure on the eye will be perceived, however the procedure is painless. Through a beam of light, the Excimer Laser delicately modifies the anterior shape of the cornea by removing small amounts of tissue (less than the thickness of a hair).

Depending on the type of technique used the vision can be recovered immediately as in other cases it will remain discretely blurred for a few days or weeks until its full recovery. A moderate one week rest is recommended, however, 99% of the patients rejoin their activities in two or three days.

What results can I get with Refractive Surgery?

In fact, more than 97% of patients achieve visual acuity better than 20/40, which is enough to drive a car without glasses. Hundreds of thousands of myopia who have suffered from myopia or myopic astigmatism have been operated through this procedure since it began in 1987. This procedure is accepted by health regulations in more than 45 countries around the world.